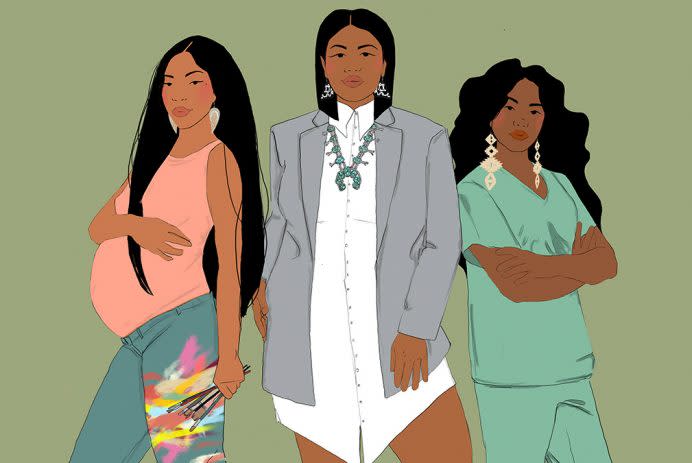 There is a common myth among non-Indigenous people in the United States and Canada that Indigenous people do not pay taxes. Whether it’s sales tax, federal income tax, or even the tax gleefully dubbed “death,” some people apparently feel that aboriginal people are exempt from all of this.

Not so. In fact, as a registered member of the Muscogee (Creek) and Cherokee tribes, I can assure you that Uncle Sam has my bank account number living rent free in his head. And I’m responsible for it all – federal, state, sales, property – you name it.

Although the details of this assumption can get complicated (ie paying their “fair share” which, given our history, is quite insulting in addition to being inaccurate.

To add even more insult to injury, Native American women might argue that they are the ones who are not getting their fair share. Data shows they earn about 60 cents for every dollar a non-Hispanic white man earns each year. That’s even less than the overall gender wage gap, which stands at 82 cents on the dollar.

In fact, September 8, 2021 has been designated Native American Women’s Equal Pay Day because today represents the number of days in 2021 it took for an Indigenous woman in the United States to earn what it took a non-Hispanic white man to win in 2020 alone.

That’s right – over a full year and eight months. As US Department of the Interior Senator Deb Haaland (Pueblo of Laguna) wrote as a member of Congress: “This is a statistic that has an impact on so many other issues, including access to health care, education, vocational training and childcare.

After all, less money in the bank means less money for basic necessities, not to mention extras.

Nor is it a problem unique to aboriginal women. BIPOC’s women’s communities, including Black and Latinx, are no strangers to their unique pay gaps, with many experts offering advice on how to negotiate wages.

And unfortunately, despite more Indigenous women seeking higher education, the biggest gaps can be seen at the bachelor’s and master’s level, according to the National Women’s Law Center.

“Native women typically have to earn a master’s degree before they are paid more than non-Hispanic white men with just an associate’s degree ($ 56,000 and $ 53,842, respectively),” the organization reports.

During a career taxed on income, it adds up.

Indigenous women recently took to TikTok to share their feelings about Indigenous stereotypes about money. And these feelings are great.

TikToker Lily (Diné), aka @sheshortnbrown, jumped on the ‘Questions I Get Asked’ trend by sharing some of the comments she says she’s sick of hearing as a native woman – one of them “must be kind not to pay taxes.” “

“No, I do,” she replies. “[D]o Do your favorite billionaires still pay them? “

This is a fair point. Find out how many non-native multibillionaires – with a “b” – on this list have dodged the income tax train.

Another TikToker, @ sherry.mckay (Anishinaabe) explains how the myth spreads to our First Nations families in Canada.

While showing literal receipts, McKay shares how much she paid in sales taxes.

“Stop with the narrative that indigenous people don’t pay taxes,” she says.

Meanwhile, Patricia Raylynn (Salish and Pend d’Oreille) shakes her head at the multiple Indigenous stereotypes thrown at her, including one asking her if she is getting free government money.

While there are so many myths that seek to undermine Indigenous communities, those that involve undeserved financial gain are particularly insidious.

After all, when you lose $ 977,720 on average over a 40-year career, being accused of bypassing the government that colonized your tribe is, well, to stay on the money topic. , rich.

In The Know is now available on Apple News – follow us here!

If you enjoyed reading this article, check out In The Know’s story about the finance expert who shares tips for women of color to negotiate more money..

More from In The Know:

This under $ 50 kit includes everything you need for thicker, fuller hair

The best drugstore beauty deals under $ 15 at Walmart

The post Native American Women Breaking My Money Myths first appeared on In The Know.