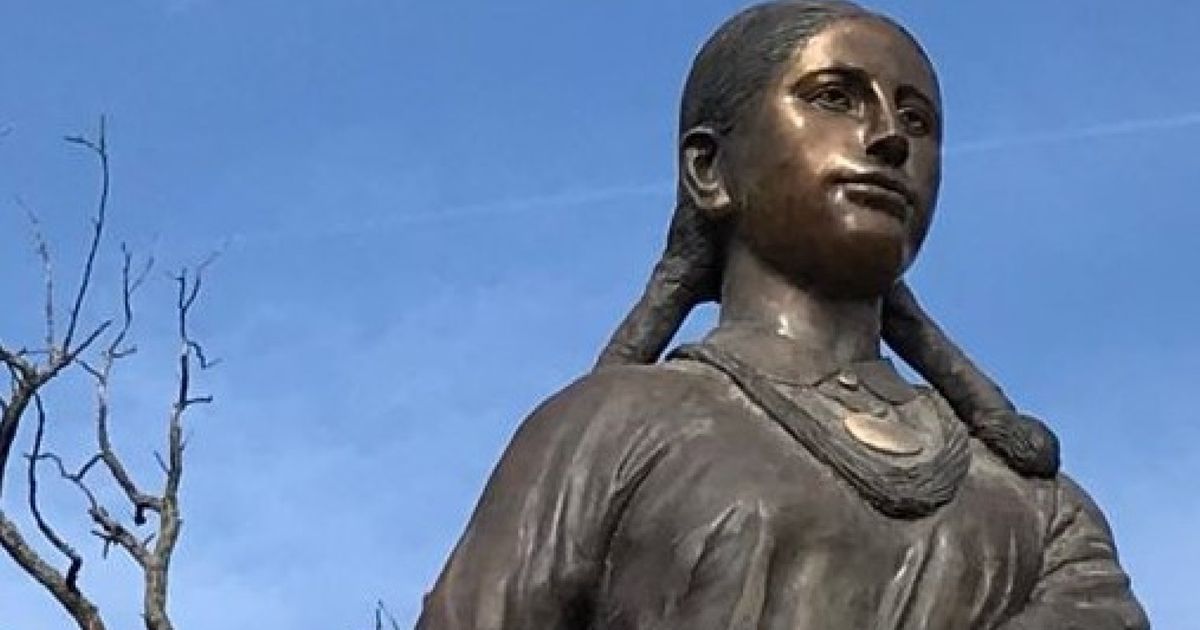 
A statue of an Osage woman, now missing, was installed on a cliff last year in a Kansas City park
Courtesy of the François Chouteau Foundation and Native American Heritage Fountain

A 7-foot-tall, 400-pound bronze statue of a Native American woman has been stolen from a memorial in a park in Kansas City, Missouri, raising alarm bells for those who commissioned it from a local artist to celebrate the founding of the city.

The artwork disappeared between Aug. 2 and 4 from a limestone cliff overlooking the Francois Chouteau Project and the Native American Heritage Fountain, Kansas City Department of Parks and Recreation spokesperson Heidi Markle said today.

The work, valued at $ 80,000, was one of a trio of sculptures by famous Chinese artist Kwan Wu depicting one of the city’s founders, the Franco-American fur trader Chouteau, bartering with two Osage Indians, she adds. The works were installed in April 2020, and the site recently hosted a celebration marking Missouri’s bicentennial.

Steven Downing, a Kansas City Police Department detective, said he assumed several people were involved in removing the heavy sculpture, which involved sawing off three mounting bolts that anchored it to a platform on the cliff. “We receive some information that a truck and a crane were involved, but the information is still contradictory,” he said.

Since copper probably made up 90% of the metal used to make the statue, police suspect the thieves intended to cut up the work and sell it to a salvage yard, says Downing, who believes the copper would have reported $ 1,500 to $ 2,000. He noted that police frequently deal with the theft of copper pipes and cables from homes in the city.

Markle says commemorative plaques and wiring have been stolen from Kansas City parks for their metal value in the past. “But in the 15 years I’ve been here, we’ve never taken an entire statue,” she says.


The three statues that were originally installed on a cliff to mark the founding of Kansas City, depicting two characters from Osage and the fur trader François Chouteau
Kansas City Parks and Recreation Department

The planned fountain and sculptures were commissioned by a foundation seeking to honor the role played by Chouteau and Native Americans such as the Osage in Kansas City’s beginnings as a fur trading post in the 1820s. A fourth statue de Wu, representing a Kaw hunter, was installed near the cliff last month.

Dana Nelson, co-chair of the foundation, told the Kansas City Star that at first she was “extremely angry” about the sculpture being stolen. “And then I was hurt that someone devalued something that was an original work of art,” she added.

Meanwhile, police hope an informant emerges who can lead investigators to an intact statue. “We posted this on social media,” Downing said. “We hope someone sees this and does the right thing.”