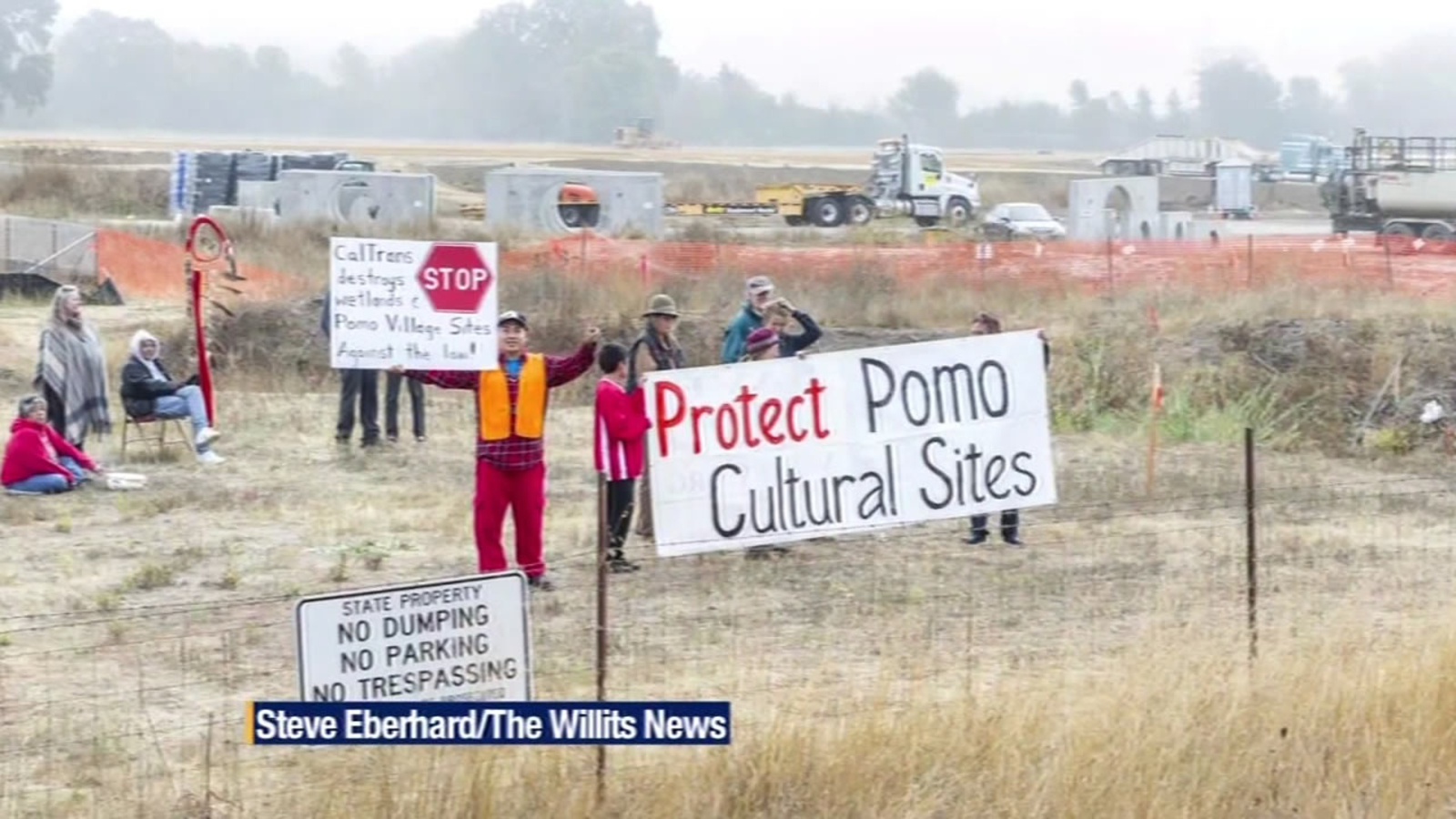 WILLITS, Calif. (KGO) – Two Native American tribes are suing Caltrans, claiming the agency knowingly destroyed important archaeological sites. This is the latest blow to a troubled highway project that ABC7 News has been investigating for more than two years. The project is located on Highway 101 in Mendocino County, where Caltrans is building a bypass around the town of Willits.

The Coyote Valley Pomo Indian Band and the Round Valley Indian Tribe accuse Caltrans of destroying their story during the construction of the Six Mile Highway. The road passes through a valley occupied by Native Americans for hundreds of years until white settlers hunted them in the 1800s.

The tribes sue Caltrans, the US Department of Transportation and the Federal Highway Administration. They claim that Caltrans illegally destroys historic and sacred Native American sites.

Tribal attorney Phil Gregory said, “It’s like Caltrans has decided to bulldoze through your church.”

Caltrans says it complied with all legal requirements by researching archaeological sites before construction began two years ago. But Gregory says Caltrans failed. â€œOnce Caltrans started construction, it found over 30 sites and it is clear that Caltrans did not do a proper investigation, as there is no way Caltrans should have missed those 30 sites. “

Caltrans admitted to having had an impact on a known site, but blamed it on a mapping error. Gregory says it was no accident. “Caltrans brought in trucks in the middle of the night and destroyed this site without alerting the tribes in advance.”

The $ 300 million highway bypass is about 80% complete, but tribes say construction and environmental work continues, crews find more and more artifacts. Gregory says he understands that “Caltrans finds areas that suggest not only human remains but graves as well.”

Caltrans denies any findings indicating possible human remains or graves. Caltrans spokesperson Phil Frisbie told us by phone that the agency has worked in good faith with the tribes. â€œWe have worked closely with state and federal agencies throughout this project. We did not destroy any villages or cultural areas on this project and we have worked diligently for almost two years with the three local tribes. . “

This highway should open next year. The tribes plan to ask a judge to stop construction until Caltrans comes to a formal agreement on how to handle the archaeological finds.

Click here to read a copy of the trial

Caltrans also worked with a third tribe, the Sherwood Valley Band of Pomo. Sherwood Valley is not a party to the lawsuit, but issued a press release indicating major dissatisfaction with their talks with Caltrans. Here is the output:

Willits, Calif .– Sherwood Valley Band of Pomo reports that after 18 months of effort, Caltrans has indefinitely blocked, if not completely abandoned, finalizing a crucial agreement document related to the Willits Bypass Project.

From January to December 2014, Sherwood Valley worked closely with Caltrans to create a Programmatic Agreement (PA) that would mitigate the negative effects on historic properties occurring within the footprint of the Bypass Project, as well as to establish protocols on how best to deal with any new discoveries of cultural resources during the construction of the Project. When new project staff took over in 2015, significant internal agency changes to a near-full PA began in earnest. According to the tribe, District 3 staff have worked tirelessly to revise the PA in a way that increasingly moves the document away from an agreement that responsibly manages the historic properties of Little Lake Valley. Sherwood Valley also reports that each of the five drafts of the PA provided to them in 2015 was considerably worse than its predecessor, leaving the tribe without a document they can sign.

Sherwood Valley Band of Pomo’s comments on the latest version of a draft PA, which were provided to Caltrans on September 2, 2015, highlights the reasons for the tribe’s lack of agreement and concern:

â€œThe Sherwood Valley Pomo Band Tribal Council cannot accept or accept the July 2015 version of CT of the [PA] because the execution of TC proposals:

significantly and inappropriately limit the number of archaeological sites through the WBP EPA that will constitute an eligible site for a PNHR field eligibility assessment;

significantly reduce the number of archaeological sites in the WBP that will meet the PNSR eligibility threshold;

dramatically diminish, if not completely depart from, CT’s legal obligation to consult with federally recognized Indian tribes culturally affiliated with lands covered by the WBP EPA regarding accidental discoveries of archaeological resources made on the WBP.
Further, accepting the processes proposed by CT would set an extremely awkward precedent for all California Indian tribes with respect to one – their legal rights to government-to-government consultation and two – the lawful and culturally appropriate management of the cultural resources on all companies managed by Caltrans in progress and to come … “

According to the tribe, that same communication included a request for Caltrans to contact the tribe to finalize the PA. A subsequent letter dated October 2, 2015 made a similar plea. The tribe now reports that CT did not respond to any of these correspondence. Such reluctance is deeply troubling to Sherwood Valley. However, this did not alter the tribe’s resolve to pursue their demands for the successful execution of a project-based agreement, as evidenced by the following tribal council statement:

â€œThe management of the Sherwood Valley Band of Pomo has consulted Caltrans in good faith regarding the Willits Bypass Project for over two years and has acted in a trustworthy manner with impeccable integrity. aim to be responsible stewards of our indigenous lands – the Petit lac valley – and the natural and cultural resources that this landscape contains. Sherwood Valley has spent hundreds of hours and tens of thousands of dollars attempting to create a PA that adequately manages the resources of concern for our community and provides redress for the great harm done to Mitom Kai and his people. , the Mitom Kai Poma and their descendants. It was a heartbreaking process punctuated by disrespectful, subversive and cavalier attitudes and acts towards Caltrans. We find this behavior particularly egregious given that the tribe did not attempt to delay or stop the construction of the ring road, despite it being a project that was never supported by Sherwood Valley. On the contrary, the tribe only asked the state and its agents to simply abide by the letter and spirit of existing laws, regulations and guidelines while undertaking the project, including Article 106 of the Law on national historic preservation and presidential and governing decrees. and memoranda, as well as USDOT and TC policies, on the topic of tribal consultation and environmental justice. The tribe finds Caltrans’ refusal to continue the consultation required to finalize a mitigation-based agreement for the Willits Bypass project unjustifiable and unacceptable. Despite the agency’s reluctance and lack of integrity on this issue; however, Sherwood Valley will remain steadfast in its efforts to achieve satisfactory mitigation of the negative impacts on our community’s resources in the Petit Lac Valley. Our tribe will not stand idly by and let a failed PA be yet another tragic result of the Willits Bypass Project. “

In connection with these efforts, Sherwood Valley says they will continue to contact Caltrans, as well as other advisory parties on the project, including the Historic Preservation Advisory Council, the Office of Historic Preservation and the Federal Highways Administration, to finalize an agreement document that guarantees mitigation for historic properties adversely affected by the bypass project. The tribe has also indicated that it will maintain a monitoring presence on the ground and will persist in advocating for more substantial and valuable archaeological investigations and more meaningful and transparent consultation in the future.

ABOUT SHERWOOD VALLEY BAND OF POMO
The Sherwood Valley Band of Pomo is a federally recognized Indian tribe. Sherwood Valley Rancheria is located in the native lands of the tribe and is headquartered in Willits, California. The Rancheria was established by a Secretary’s Order in 1909 and is governed by a constitution and by-laws duly adopted and approved by the Home Secretary on July 25, 1974. The Sherwood Valley Tribal Council, as representatives of tribal members, strives to promote and perpetuate the protection of natural and cultural resources for future generations.